I haven't played or installed the latest revisions.who is playing and what do you think?

Is this the new one? It's been a few months since I last played. Yeah the new one.

Doesn't work well on my laptop, keeping in mind I have a shitty laptop
Top 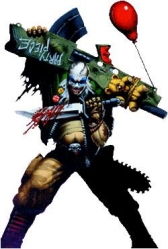 Been a year since I last ran it. My initial impressions were good and I saw the potential it had, but as of January last year I see that the development team is going to take it in the wrong direction with the questionable changes they did to it and firmly stand by, changes they plan for it, and the fact that it runs like absolute dogshit without some serious ini file editing (they have a ton of things that have zero impact on visuals enabled that tank your frame rate, my rig runs a 4GHz Vishera and Radeon HD7950 both of which were more than standard at initial release of this prealpha). I also had a few other issues with it before I saw that it was pretty much doomed, namely the feel of hit scan weapons (enforcers and sniper rifle feel very puny and off in spite damage output), the impact hammer (literally worst in the series), and lack of a ripper (kept out of the game specifically to appeal the pretentious so called "pro players").

Unreal Comparison.jpg
You do not have the required permissions to view the files attached to this post.
Top

Don't know what is the current menu for Epic, but last I saw a few months ago they were working on other game and left the UT4 project behind on a greater margin.

Significantly, the last add-on for UT4 was a gametype called Blitz. It's like a mix of CTF, DOM, and AS.
Saw the hub part changed, but you can't get to choose the server you want to play on unless you have a way to enter it manually.

I'm not sure when I'll be re-downloading and checking to see the new progress. Last I checked out was around spring last year.

well I tried UT4 the other night. It feels and looks like utter shit.